My husband and I once went to one of those medieval tournament shows. You know the kind–theatrical jousting, $15 drinks served in plastic chalices, and giant turkey legs dripping with grease.  We were doubtless having more fun than our server, a spotty young man forced to parade around in a spandex jester’s uniform. But I have to hand it to him, he did his best to stay in character.

He arrived at our table with the first course–a crusty bread bowl filled with lukewarm red soup.

“What kind of soup is this?” I asked.

“Dragon’s blood,” he answered in a quavering voice, wiggling his fingers to emphasize the horrifying nature of our dish.

Now I should mention, I’m a very picky eater. I don’t eat red meat or pork, and I didn’t want to shove a heaping spoonful into my mouth only to find it was seasoned with bacon bits.

“No really, what kind of soup?” I asked.

“Dragon’s blood,” he repeated, again with the finger wiggles.

“She’s a vegetarian,” my irritated husband finally cut in (which is not strictly true, but easier than explaining my weird eating habits).

“It’s tomato,” he answered in a weary voice, hanging his head and sighing.

I tell you this not to highlight my ability to suck the life out of hard working servers, but as a roundabout way to introduce:

There is limited evidence (that I’ve come across–it may be out there) to suggest bread bowls in their modern form existed during the Middle Ages. A few websites claim that bread bowls were invented in 1427 by an Irish noble trying to impress the king. The king, thoroughly pleased, commissioned the world’s first bread bowl shop in Dublin. I like this story. In my mind, it plays out Game of Thrones style. The noble is Tyrion Lannister, and the king is Jon Snow (here’s to hoping). Jon is so impressed that he funds a chain of medieval-style Panera Breads.

Alas, this is all in my head, and I have no idea whether the 1427 story is true. Neither site offered any references, so I can only hope. However, even if this bread bowl origin story is little more than urban legend, the bread bowl does have a medieval cousin…

A trencher was basically a piece of stale bread (initially) that medieval people used as a plate. This website discusses trenchers in their section on unleavened bread. Although I take issue with their claim that bakers didn’t use yeast in their breads until the sixteenth century, I imagine the first trenchers probably were pieces of leftover flatbread.

During the Middle Ages strict rules governed the baking and selling of bread, and that included trenchers. According to Food and Drink in Medieval Poland: Rediscovering a Cuisine of the Past (9), medieval food laws dictated that the Polish court use one type of bread for trenchers and another for eating. This would have been a loaf bread made from a sourdough starter composed of a blend of wheat and rye. That isn’t to say peasants wouldn’t have made use of their stale flatbreads, but Anyone who was Anyone (or wanted to be Anyone) would have used this type of leavened bread for their trenchers.

The Stairway to Heaven is Made of Bread

If you were wealthy during the Middle Ages, you were probably a little worried about your immortal soul. After all, the bible claims your chances of getting into heaven are about as good as a camel going through the eye of a needle. Fortunately, you are rich, and therefore great at finding loopholes. You realize you can write-off your sin of wealth through great acts of charity. (source). This lead to a lot of big donations–funding hospitals was particularly popular–but also feeding the poor. And what better food for the poor than your leftovers…including your stale, crusty plate.

Now if your not exactly rich, you’ll likely choose to feed your trencher to your pig instead of the poor. They’re hungry little buggers, and a fatter pig mean more bacon for all. But if you’re poor, or just really hungry, you’ll eat the trencher yourself. It might not taste all that great, but at least you won’t have to do the dishes.

In my last post here, I made some medieval barley flat bread. I saved one and let it set out to harden with the intention of using it as a trencher. I must admit, I let it sit out longer than I intended. A week after I made it, I found that it was quite hard and, thankfully, free of any signs of mold. I hadn’t been very careful about putting it somewhere where it would lay flat. I set it on top of a tray on my toaster oven. It got knocked around a bunch, and I found it had hardened into a vaguely s-shaped trencher. Now if I were a medieval peasant, I would probably have used this flexibility to my advantage and draped the bread over something bowl shaped to better hold my food. I have no idea if anyone actually did that, but it’s what I would do. 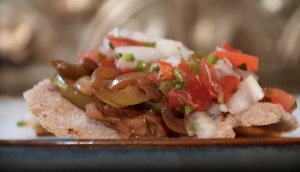 I didn’t have time to research and try out a medieval recipe, so I decided to use the trencher for  my lunch of leftover fajitas.
I found it to be very sturdy. The odd shape I let it dry into was a little annoying, but overall I had no problems. I finished my lunch, and it was time to eat the plate.

I thought the liberal amount of lime juice in the pico and the fajita sauce on the chicken and veggies would be enough to soak through the bread. I was wrong. Dead wrong. It was like chewing on tree bark.

I needed a better sauce. A sauce that had been thoroughly heated. One that might penetrate the glutenous concrete of my medieval plate. I went to the cupboard and pulled out a can of spaghetti sauce. I nuked it in the microwave and plastered it all over that bad boy. Then I let it sit for a few minutes so it would really sink in.

It was better this time. A lot easier to chew, even if the texture was a bit like cardboard. Every now and then, presumably where the dough was thicker, I’d hit a bite that wasn’t quite softened enough. Fortunately, my teeth remained in tact. Overall it was edible, if not tasty.

My advice: If you find yourself magically transported to the Middle Ages, find yourself a noble and beg for their trenchers. You might be eating kitchen scraps, but it has to be better than week-old flatbread.

11 thoughts on “Let Them Eat…Plates?”

Follow Memoirs of a 21st Century Time Traveler on WordPress.com